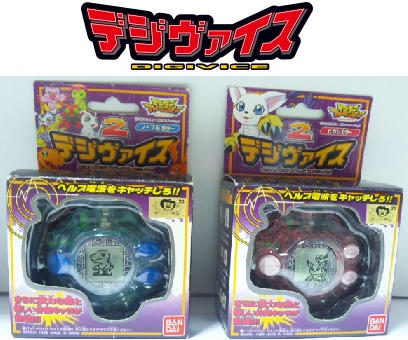 Digivice (デジヴァイス) is the first series of toy digivice based on the Digimon anime.

The Digivice is the first in the series of Pedometer toys. There is no training element; instead, you have control over the Digimon in your Season 1 Digivice. You befriend more Digimon as you progress throughout the areas. After certain amounts of battles, your Digimon will evolve into their more powerful forms. Progressing through the areas of the map requires you to take ‘Steps,’ which in turn are counted by a mini pendulum clicking on the inside of the toy. Keep it attached to your belt, and as you walk (or shake it manually) the counter will decrease, leading you to the boss of the area. Beat the boss to progress.

Game Play:
You are initially prompted to pick one of the 7 Chosen Digimon. Agumon, Gabumon, Gomamon, Palmon, Tentomon, Patamon, and Piyomon are all available.

Input the time and the game will begin. Your Digimon will begin in the In-Training stage and evolve into Child shortly. Paging through the Menus, you will see that there is a map with 7 dots indicating the 7 areas. As you progress throughout the areas you will fight many Digimon; you have the option to back out of some of these fights, which will make your Digimon unhappy. If your Digimon gets injured (skull icon) you will be able to treat it with the Medical Kit.

You will be able to have the other 6 Digimon join your team by rescuing them via the Help Wave feature. In this version 2, you can use other’s Boss enemy that you have defeated as the playable character.

Battle:
When you encounter a Digimon to fight you will have the following options:

Once that is decided your Digimon will battle and you will attempt to win the round. When the countdown ends, press the A button rapidly to make your attack more likely to go first.

Notes:
1. The Child Digimon evolves with 10 victories in battle into Adult, and the Adult Digimon to Perfect after 15 battles. You will encounter the Digidestined Digimon periodically and a victory means you add them to your party.

2. Connecting your Digivice with the Digimon Analyzer (Koushiro’s Laptop) will also allow you evolve your Digimon into the Adult stage (on the version 2) unconditionally without the battle requirement.

3. To catch the extra Digimon you need to utilize the electric HELP wave. The HELP wave will appear randomly during shaking, or after battles. You have three minutes to get the HELP wave to fill up and press the button when “CATCH” appears on the screen. You must then fight a Digimon guarding the Digimon in the HELP wave. If you win, the Digimon being guarded will join your team. If you lose, you may re-encounter the HELP wave later on in the Island.

4. To get Veedramon with the Digivice Version 2, you need to Connect with the Digimon Analyzer OR get all seven of your Digimon to evolve to Perfect and complete the map; if you succeed in getting the HELP wave, V-Dramon will become your friend.