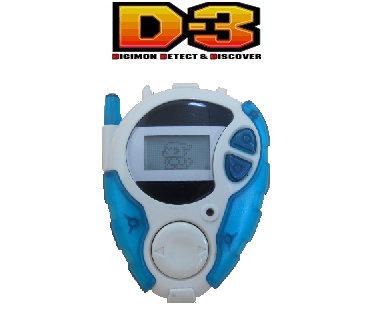 This is a Digivice Guide for the Digivice D3 Version 2 (US/EU/Asia), The D3 Digivice is another Pedometer Digivice. D3 Version 2 can be identified by a transparent casing and two arrows on the round button. Also on the Version 2, you must then choose a map location. Let’s start this simple guide. 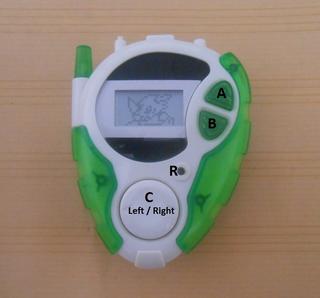 There are 5 Available Buttons on Digivice D-3 Version 2 :

B Button = Cancel
For return/back navigation or cancel command.

R = Reset
Hit this button will cause all your precious data erased and restart the game like new.

Distance,
It let us know how many distances again before we reach the main boss

Step,
How many step distance you have progress

Status,
Overview of your Digimon Partners with their Evolution and strength level (HP + Attack Power) of that Digimon.

Medical,
Will needed to cure your Digimon if losing any battle

V.S,
Battle with others Digivice!

Scan,
All Digimon can be scanned on the US D-Terminal.

Fight,
“Ready” then just Shake the Digivice when “Count” word displayed on screen

Digivolve,
Evolution to Champion or Ultimate or Mega forms

Escape,
Run away from battle

For this Digivice D-3 Version 2, 6 Partners Digimon available to choose from the start which is: Veemon, Hawkmon, Armadillomon, Patamon, Tailmon and Wormmon.

Later in the game, You can also use partner from any of the rescued Digimon like Agumon, Gabumon, Biyomon, Palmon, Tentomon, Gomamon, and Terriermon.

– In each Map there will initially be 3 dots, 1 point contains Dark Spire, 1 point Digimon Village (Koromon, Tsunomon, Pyocomon, Tanemon, Motimon, Bukamon, Gummymon), and 1 more point contains Digimon season 1 to battle in order to save them from Dark Spire influences). After the 3 dots are complete, 1 point will appear again containing the Boss Map.

– Upon arriving at Digimon Village there will be 3 advantages:
1. D-Power increases.
2. Getting DigiEgg.
3. Attack Digimon We grow to 2 (Initially 1), Life also increased to 4 (Originally 3).

– When we reach Dark Spire, we must destroy the Dark Spire and defeat the Guardromon guarding it. Only after that our Digimon can Digivolve normally to Ultimate level, not just Armor Digivolve.

– To get DigiEgg, You’ll get the new one when you find the egg with a question mark while in game. To get a new Digimon party, we will know it when the Digivice ring with the appearance of the question mark on the right & left screen, shake Digivice quickly to find the party.

– But the appearance of question marks on the right and the left screen does not always mean that we will meet the party Digimon, there are another 3 possibilities:
1. Meet BlackWarGreymon / Mummymon / Arukenimon who will try to kidnap/attack our Digimon, if He succeeds, One of our Digimon Party will disappear (the lost Digimon can be found again) or only the D-Power we have is depleted to 0.
2. Meet Digimon Village.
3. Meet SaberLeomon / Andromon that will help you defeat the enemy in the next battle.

Mission
Defeat Kuramon and the Evolutions! 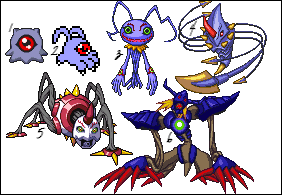 – This map consists of 3 starting points which each end at that point we will fight the following Main boss: Mummymon, Arukenimon, & BlackWarGreymon.

– When we battle Mummymon, for the first time our Digimon in Party can Digivolve to Mega level (Automatically & do not reduce D-Power). After successfully defeating Mummymon, Arukenimon, & BlackWarGreymon, there will be no more effort from them to kidnap/attack our Digimon.

– Then, after successfully past 3 points, 1 new point will appear. This point is the last boss Diaboromon. But We will not directly fight the Diaboromon,

– After successfully defeating Diaboromon, a cutscene ending appears with all the party of Digimon are seen being gathered & rejoiced.